From across the sea six million men and women call to us for help, and eight hundred thousand little children cry for bread.

These children, these men and women are our fellow-members of the human family, with the same claim on life as we, the same susceptibility to the winter’s cold, the same propensity to death before the fangs of hunger. Within them reside the illimitable possibilities for the advancement of the human race as naturally would reside in six million human beings. We may not be their keepers but we ought to be their helpers.

In the face of death, in the throes of starvation there is no place for mental distinctions of creed, no place for physical differentiations of race. In this catastrophe, when six million human beings are being whirled toward the grave by a cruel and relentless fate, only the most idealistic promptings of human nature should sway the heart and move the hand.

Six million men and women are dying from lack of the necessaries of life; eight hundred thousand children cry for bread. And this fate is upon them through no fault of their own, through no transgression of the laws of God or man; but through the awful tyranny of war and a bigoted lust for Jewish blood.

In this threatened holocaust of human life, forgotten are the niceties of philosophical distinction, forgotten are the differences of historical interpretation; and the determination to help the helpless, to shelter the homeless, to clothe the naked and to feed the hungry becomes a religion at whose altar men of every race can worship and women of every creed can kneel. In this calamity the temporalities of man’s fashionings fall away before the eternal verities of life, and we awaken to the fact that from the hands of one God we all come and before the tribunal of one God we all must stand on the day of final reckoning. And when that reckoning comes mere profession of lips will not weigh a pennyweight; but deeds, mere intangible deeds, deeds that dry the tear of sorrow and allay the pain of anguish, deeds that with the spirit of the Good Samaritan pour oil and wine in wounds and find sustenance and shelter for the suffering and the stricken, will outweigh all the stars in the heavens, all the waters in the seas, all the rocks and metals in all the celestian globes that revolve in the firmament around us.

And so in the spirit that turned the poor widow’s votive offering of copper into silver, and the silver into gold when placed upon God’s altar, the people of this country are called upon to sanctify their money by giving $35,000,000 in the name of the humanity of Moses to six million famished men and women.

Because of a war to lay Autocracy in the dust and give Democracy the sceptre of the Just.

And in that war for democracy 200,000 Jewish lads from the United States fought beneath the Stars and Stripes. In the 77th Division alone there were 14,000 of them, and in Argonne Forest this division captured 54 German guns. This shows that at Argonne the Jewish boys from the United States fought for democracy as Joshua fought against the Amalekites on the plains of Abraham. In an address on the so-called “Lost Battalion,” led by Colonel Whittlesey of Pittsfield, Major-General Alexander shows the fighting stuff these Jewish boys were made of. In some way or another Whittlesey’s command was surrounded. They were short of rations. They tried to get word back to the rear telling of their plight. They tried and they tried, but their men never got through. Paralysis and stupefaction and despair were in the air. And when the hour was darkest and all seemed lost, a soldier lad stepped forward, and said to Col. Whittlesey: “I will try to get through.” He tried, he was wounded, he had to creep and crawl, but he got through. To-day he wears the Distinguished Service Cross and his name is

Because of this war for Democracy six million Jewsh men and women are starving across the seas; eight hundred thousand Jewish babies are crying for bread.

The Jew Has Helped Everybody But The Jew.

From out of the gloom of this war every other race, save one or two, has snatched a ray of sunshine. But amid the encircling gloom there is no light for the Jew “to lead thou me on.” The war is over for everyone, but the Jew. The knife is still at his throat and an unreasoning and unreasonable century-old lust for Jewish blood opens his veins. The Jew in Roumania, Poland and Ukrainia is being made the scapegoat of the war. Since the armistice has been signed thousands of Jews in Ukrainia has been offered up as living sacrifices to diabolical greed and fanatical passion — their throats cut, their bodies rended limb from limb by assassin bands and rabid soldiery. In the city of Proskunoff one day a few weeks ago the dawn saw the door of every house wherein lived a Jew marked as a shambles for slaughter. For four days, from sunrise to sunset, fanatics plied the dagger like demons from hell, stopping only to teat with hands adrip with the blood of Jewish victims. They killed the men; they were less merciful to women. These they violated, and then they killed. From a purpose to a fury, from a fury to a habit ran this killing of the Jews, until within four days the streets of Proskunoff ran red with blood like gutters of a slaughter house, until its homes became a morgue for thousands of slaughtered human deings whose gaping wounds cried out for vengeance and whose eyes had turned to stone at the horrors they had seen. As Hon. Simon W. Rosendale, aptly paraphrasing Bobby Burns’ thought, in his speech not long ago, said it is the age-old story of “man’s inhumanity to man that makes countless thousands mourn.” For as it has been at Proskunoff, so has it been in a hundred other places. The bloody tale hath repetition ad nauseum. It is the same tear-stained story — the same old stain upon the escutcheon of humanity. Verily, Byron was right when he wrote:

Tribes of the wandering feet and weary breast

Whither shall ye flee to be at rest?

The wild dove hath her nest, the fox his cave,

Mankind their countries, Israel but the grave.

[Illegible] to a place in the sun, and the crucifixion of Jews must stop. We repeat the war is over for everybody, but the Jew. Like Isaac the knife is at his throat, but unlike Isaac no power seems able to stop the steel from thirsting for his blood. But some power the world must raise up to prevent this decimation of a deserving race. For the peace of the world a League of Nations let us have by all means; but for the Humanity of the World, to give justice to the Jew and other oppressed peoples on earth, let us have a Truce of God! — Albany Times Union.

By Martin H. Glynn
(Former Governor of the State of N.Y.) 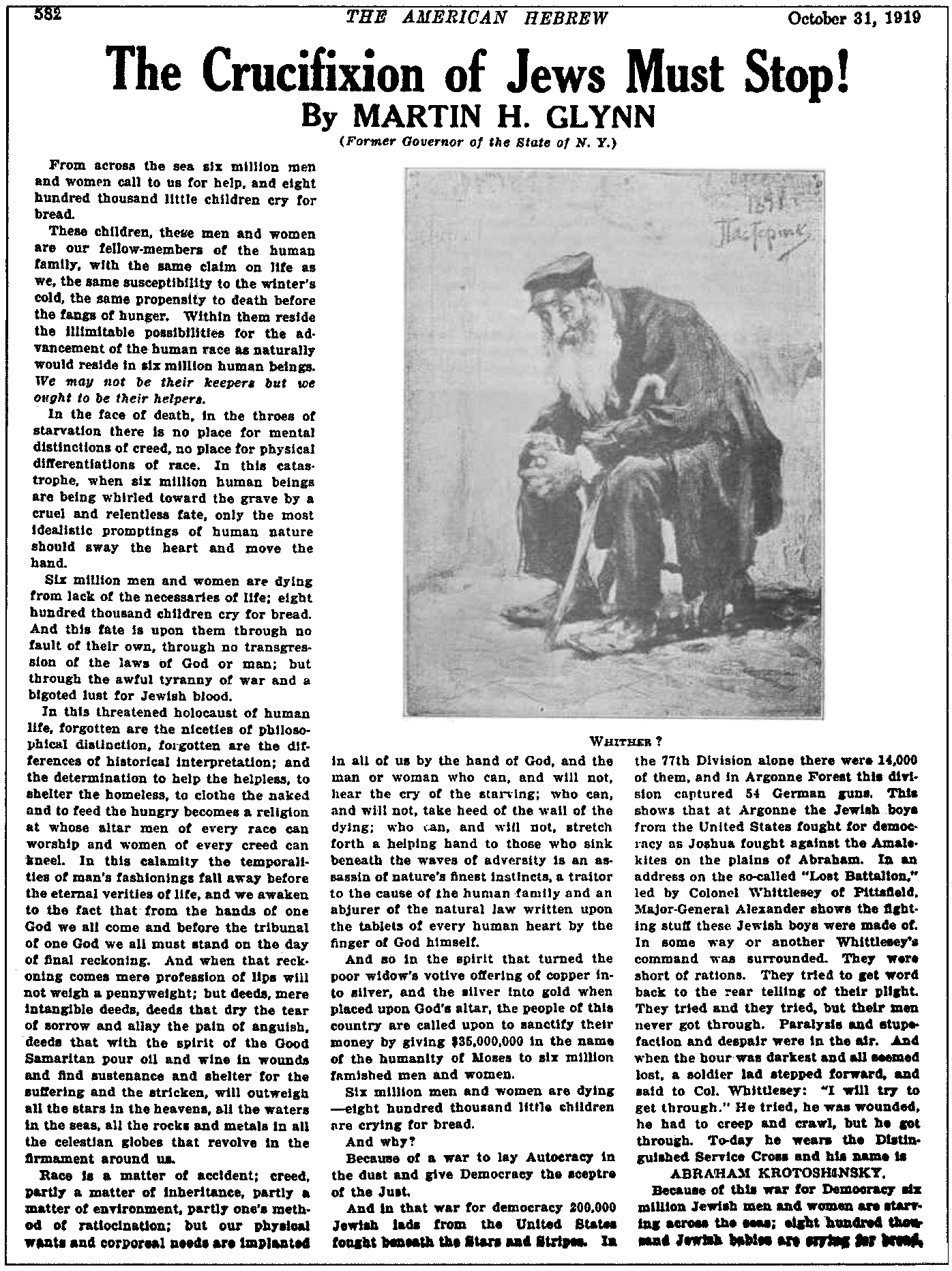